Face coverings will be mandatory on public transport in England from Monday 15th June 2020, to help deal with the coronavirus pandmic.

Transport Secretary Grant Shapps has announced the change, saying: “We need to ensure every precaution is taken” on buses, trains, aircraft and ferries; as further lockdown measures are eased and passenger numbers increase. 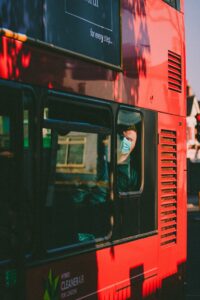 Currently passengers are advised to wear a face covering but are not stopped from travelling without one.

Finn Brennan, the ASLEF union’s District Organiser, told me on LBC News it welcomes the announcement. But he adds: “This is something that should have happened a long time ago and something that we have been calling for. Other metros of the world from Madrid, Paris, New York, having been doing this now for weeks. So, as always throughout this pandemic, the government has delayed, procrastinated, caused confusion.”

Mr Brennan continues: “Back in April, Matt Hancock, the Health Secretary, was arguing against the compulsory use of face masks. I think many people who have seen the pictures of crowded tube trains early in the morning over the last months will wonder if those people’s lives were worth less.

“Again, this is going to be compulsory from the 15th (of June). Why is it okay for someone to get on a train tomorrow, potentially spreading a deadly disease, but it will not be from the 15th. The government is always acting too little, too late.”

The ASLEF union represents train drivers, so I asked Mr Brennan how it will be advising its members to respond to this announcement by the UK government.

He told me: “We asked London Underground what plans they had in place to police this and they didn’t have an answer, which was extremely disappointing. It is an issue we have been highlighting with them for weeks.

“I know Peter Hendy (Chairman of Network Rail) seems very optimistic that with the alcohol ban on the London Underground people will self-enforce. But the reality is passengers seem very reluctant to wear masks. There has been a very low take up in recent weeks.

“A mechanism will have to be found to complete this. It will be part of the conditions of carriage. One will not be able to travel on the Underground without a mask. But there is no answer from London Underground. How this is to be enforced? How staff are to be supported? What British Transport Police resources will be available? And what will happen if people refuse to do it?”

The Mayor of London, Sadiq Khan, is among those who have been lobbying the Government to make face coverings mandatory on public transport. Mr Khan says ministers have “finally seen sense”, adding there is “a large body of evidence” face coverings can help stop the spread of coronavirus. 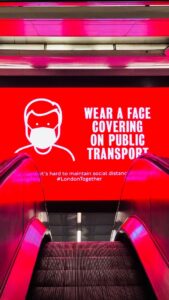 The Mayor is also Chairman of Transport for London, which is responsible for London’s transport network. I asked Finn Brennan if this puts his union at odds with Mayor Khan?

He told me: “We are supporting them now. We have been advocating for this in the same way as the Mayor does. We strongly support this announcement. But it is a shame it’s taken so long to get here.

“Obviously, we have concerns about how it is going to be policed and there should be plans in place to do that.”

Transport operators will have the power to enforce the wearing of face masks on public transport, with the support of British Transport Police.

But will this put transport operator staff, who are ASLEF union members, at risk? Mr Brennan told me: “That’s exactly the question we asked London Underground and they weren’t able to answer.

“Clearly, staff cannot be expected to put themselves at risk. There needs to be an enforcement plan in place for this.

“This is something that should have been put in place a long time ago. The job of train drivers is, to be frank, even a station staff to try and physically stop people going onto the system without a mask.”

So, what needs to happen for both sides to be comfortable with the government’s mandatory wearing of face masks on public transport, in England?

Finn Brennan told me: “We want answers from the company about how they are going to make this happen.

“I thought they were strongly in favour of it, but it has to be done in a way that doesn’t create extra risks for staff because we’re bound to find situations where individuals are not wearing a mask. There may be increased risks of confrontation.

“All of that is going to have to be managed very carefully. My understanding is that from Monday, London Underground were stepping up the encouragement of people to wear masks and were handing out masks at some stations in order to encourage that.

Questions and answers on the use of face coverings

Why is the UK Government recommending face coverings?
The Government states that, while wearing a face covering does not protect the wearer, it may protect others if people are infected but have not yet developed symptoms.

How will it be enforced? 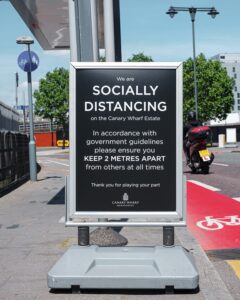 While announcing the measures, Mr Shapps told reporters that it will be enforced by transport operators and British Transport Police “if necessary”. He said that changes would be made to the conditions of travel for trains and buses, adding: “This will mean that you can be refused travel if you don’t comply and you could be fined.”

Are there exemptions?
There will be exemptions to the rules for very young children, disabled people and those with breathing difficulties.

What if someone is travelling on a train from Wales or Scotland to England?
Mr Shapps has suggested that passengers on trains starting outside England may have to put on coverings when crossing the border. He said it would be up to Scotland and Wales to issue their own guidance. But earlier on Thursday, Scottish First Minister Nicola Sturgeon tweeted that her government is “considering making it mandatory” to wear face coverings on public transport and in shops.

Where else should they be worn?
Current advice is for face coverings to be worn in enclosed spaces, which also includes some shops. People are not being told to wear them outdoors, while exercising, in schools or offices.

What about masks?
Several airlines such as easyJet and Ryanair have introduced a requirement for passengers to wear face masks. But the Government believes these should be reserved for those who need them to protect against risks in their workplace, such as health and care workers. 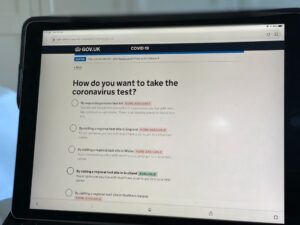 If someone develops Covid-19 symptoms, can they still go out if they wear a mask or covering?
No. People with coronavirus symptoms and their household should isolate at home.

What sort of face coverings should be used?
Scarves, cotton home-made coverings that cover nose and mouth and other bought masks that are not ones used by the health service are fine.

Officials said that people can make coverings at home, but added that “the key thing is it should cover your mouth and nose”.

What is the science?
The Scientific Advisory Group for Emergencies (SAGE) thinks the evidence of masks preventing the spread of infection from one person to another is “marginal but positive”. The World Health Organisation has stressed that there is no evidence that wearing a mask – whether medical or other types – by healthy persons in the wider community can prevent them from infection with respiratory viruses, including Covid-19.

Are there any downsides to using face coverings?
Concerns have been raised that they could give a false sense of security and mean that people are less stringent with other preventative measures such as social distancing and hand hygiene.