The word-trading between the Mayor of London and the President of the United States of America has reignited.

Sadiq Khan has criticised Donald Trump after the US President cancelled a trip to Poland to commemorate the start of World War II. 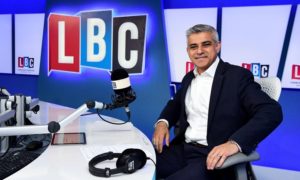 But is it right to say Sadiq Khan was spoiling for a verbal fight with President Trump? No – not according to the Mayor of London.

I spoke to him on my LBC London News programme where Mayor Khan told me: “I’ve not been mocking Donald Trump on social media.

“What’s happened is (last) weekend I was in Poland. I was invited by the Mayor of Gdansk to Poland to commemorate with the Polish people the 80th anniversary of the start of the Second World War.

“The Second World War began at 4:45am on the 1st September when a Nazi German ship fired shots into Westerplatte in Gdansk. I was humbled to be at the service (last) weekend.

“In response to a question from a Polish journalist, asked what I thought of him (President Trump) not coming, I made a comment about him playing golf. That’s his choice what he decides to do. And it’s for him to respond how he chooses to respond.”

“I made the right choice, I think, as somebody who’s a proud Brit and is proud of the sacrifices made by British men, women and others across the world to defeat fascism and Nazism. And I was proud as the Mayor of London to be there with other leaders and Polish people and other world leaders in Poland.

“It’s for President Donald Trump to explain why he chose to do what he did (last) weekend rather than being in Poland.”

But does Mayor Khan believe a line needs to be drawn under these on-going spats?

He tells me: “When I’m asked questions about Donald Trump I can’t win. When I don’t answer the question, I’m accused of not answering questions that I’m being asked by journalists. When I do respond in a courteous, polite way, he responds in the way that he chooses to do so.

“I’m quite clear in relation to my priorities as Mayor of London to make sure I deliver for our city.

“But if people who are saying things that are objectionable and are accounted to the values of the city that I am the Mayor of, I’m not going to be afraid of calling them out and I don’t apologise for calling out people who normalise racism.

“I don’t apologise for saying it’s wrong for the President of a country that I love and adore to be a poster boy for far right and racists across the world.

“So, I’m not going to apologise for standing up for the values of our city.”