There’s furious reaction from many rail commuters in the United Kingdom with the announcement they face a 2.8% increase in season ticket costs, from January 2020.

The cap on the annual rise in regulated fares is linked to July’s rate of Retail Prices Index (RPI) inflation, which has been announced by the Office for National Statistics as 2.8%.

Transport Secretary Grant Shapps says: “I’d love there to be no fair rises at all. The truth is if you don’t keep track with inflation, you end up in a situation where you’re putting less money into the railways.”

But rail campaign groups warn commuters will “refuse to pay” if season ticket prices continue to be hiked.

I spoke with David Sidebottom, Director at Transport Focus, the independent rail, bus, tram and road user watchdog, on my programme on LBC London News. He told me: “Passengers will be mystified why again the commuter fares are hit by this increase.”

But what are commuters getting for their money? David tells me: “That’s the question the average passenger on the platform is asking.

“Rail passengers are already paying about £10 billion a year into running the railway. This extra money is about looking to invest in the improvements. For some passengers they’ll have seen some new trains. Thameslink, for example.

“Passengers want that desperate, reliable punctual railway. For the past couple of years, at best, it’s been patchy for some passengers. And they want to see that investment in making their railway more reliable, more frequent.”

This is nothing new for commuters. Year-on-year increases are announced in August and kick in the following January. Not a very happy new year.

What needs to happen to stop this? David tells me: “The light at the end of the tunnel is part of what the government commissioned about this time last year, a fundamental review of the railway around fares and the railway. The Williams review is due to publish its initial thoughts in the autumn.

“It needs to change because passengers clearly are unhappy. We know from all the research we do with passengers who rate their journeys, only 30% of commuters across Great Britain feel like they’re getting good value for money. That’s not a great feeling of response from passengers.

“This fundamental change needs to come in soon and be led by government.”

I asked David what needs to happen so passengers aren’t in this same position again: “We talked about value for money rather than absolute cost and passengers tell us they don’t feel they’re getting value for money.

“Our push is back on government, Network Rail and the train operators to deliver more of the basics, more consistently. So better punctuality and reliability.”

“When things do go wrong on the railway, passengers should claim compensation. Get some of that money back that they’re putting in every year when trains are delayed by more than 15 or 30 minutes, depending on which train operator they’re sat on.”

Transport Focus also wants the formula for rail fares to be based on the Consumer Prices Index. Not the Retail Price Index, as it is at the moment. 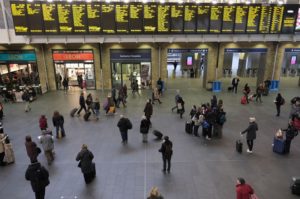