Whirlpool has begun recalling 519,000 of its Hotpoint and Indesit washing machines.

A flaw with the door locking system can cause the appliances to overheat and potentially catch fire.

Under the recall, all affected customers will have the choice of either a free like-for-like replacement, or a free in-home repair of their existing appliance. However, this won’t take place until January (2020) at the earliest.

I spoke with Robert Jervis-Gibbons, from Electrical Safety First, on my LBC News programme who told me this is the latest problem affecting Whirlpool and its customers.

“What we know is with the tumble dryer situation, it took (Whirlpool) four years to issue a recall. And it was only as a result in the summer of this year the government forced them to do that.

“They’ve already had six months to try and find the tumble dryers which are affected, because the recall was issued then.

“We don’t know whether the government has told them to issue a recall when it comes to these washing machines. So essentially, they’ve now got potentially over a million units to find and to know where these items are, because the problem is the manufacturer doesn’t necessarily know all the time where their customers are.”

Does this put the story in a completely different context if the government has leaned on Whirlpool to take this action? Robert tells me: “If this is the second time that the company has been told to issue a recall this is very worrying.

“We are pleased the company has issued a recall. But if it is the second time this year that the government has put pressure on the company to issue a recall, very serious questions should be asked.” 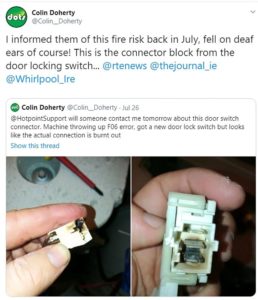 Can Whirlpool customers with an affected machine buy a new one and claim that expense back? Robert says: “What we understand is this will start in January (2020) where they will get either get a repair or replacement. No refunds will be offered in this case.

“The company has followed the legal situation and offered a repair and replacement that is the right thing to do. But clearly it is going to cause a lot of inconvenience for people over the Christmas period when they’re not able to use their washing machines.

“It’s a very busy period for families and friends coming round where people will need their washing machines like they do in every other part of the year.

“Above all what we would say to customers of Whirlpool is not to use these machines until the recall starts.”

In response, a Whirlpool spokesman says: “By visiting our website, people can instantly check if their washing machine is affected using an online model checker tool, and there is a full list of model numbers.

“They can also get more information on the safety notice and register their details with us so we can contact them directly to schedule an appointment for their affected appliance to be replaced or repaired once the recall officially begins in early January. 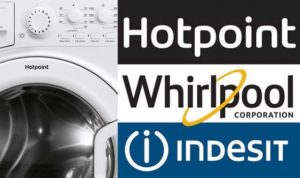 “Alternatively, customers can call our freephone hotline on 0800 316 1442 and one of our team can help them check if their washing machine is affected.

“The call centre is open seven days a week and we are extending opening hours to make sure we can be available to help our customers when it’s convenient for them.

“We thank our customers for their patience and understanding and are 100% committed to caring for them.”

In the meantime, it advises people to unplug their washing machines and not use them.