Fatboy Slim has curated an art exhibition with the centrepiece the hundreds of items from his collection of Smiley memorabilia, in tribute to the Smiley and its creator Harvey Ball.

The DJ and musician, whose birth name is Norman Cook, has spent the past 40 years collecting pieces featuring the iconic symbol – ranging from cuff links, shoes, scales, clocks, jewellery, wristbands and even a toaster.

The history of the Smiley goes back to 1963 to Worcester, Massachusetts. It was then Harvey Ball, an artist, was commissioned by the State Mutual Life Assurance Company to make badges to improve staff morale. After its employees began wearing the Smiley pins, the symbol became increasingly popular and more versions were produced. 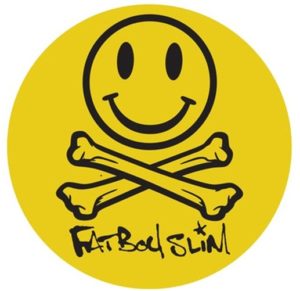 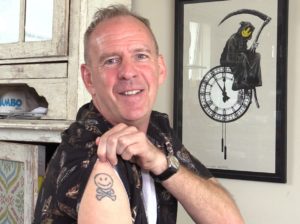 Norman’s love of the Smiley also stretches to his home – a giant mural adorns the roof of his house while his only tattoo is a smiley face and cross bones, which is also the unofficial logo of Fatboy Slim. He continues: “Over the years it has elevated from 200 badges made for an insurance company to this worldwide icon and this symbol of, what is for me, happiness, goofiness, stupidity and unconditional love.”

The Smiley symbol has been rediscovered by every generation. But Norman believes today’s most commonly used representation of a smiley face, the emoji, should not be classed as a Smiley. He says: “What I love is the classic Worcester Smiley which has certain dimensions, slightly off-centre. I don’t recognise emojis as Smileys, they’re something completely different.”

For his Smile High Club exhibition, Norman has collaborated with Portuguese artist Vhils, whose birth name is Alexandre Farto, who owns the Underdogs Gallery in Lisbon, Portugal. He adds: “I’ve spent 30 years being a DJ or a musician or a producer and I’m just like a kid in a sweet shop with this. I’m a fan of art and I’m a collector but now to be involved and working with artists, I feel like we’re collaborating. I can’t draw and I’m colour-blind, so I could never be an artist.” 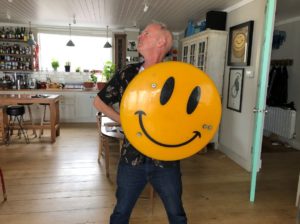 The centrepiece of the exhibition is Norman’s sprawling Smiley collection, which has been painstakingly transported to Lisbon. It will sit opposite an image of the cabinet, which has been captured by British photographic artist Mark Vessey.

It’s a collection money cannot buy – Norman says: “The only thing that isn’t for sale in the exhibition is my Smiley collection!”

The Smile High Club art exhibition is at Underdogs Gallery in Lisbon, Portugal, until the 21st July 2019.