Live recordings of Bob Marley, once described as “the lost masters,” have been found in the basement of a severely water damaged hotel, in London, United Kingdom. 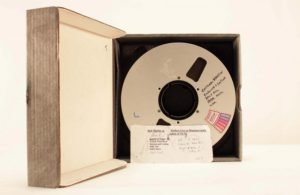 A recording of Bob Marley’s concert at Hammersmith, London, on 17th June 1976.

The reel-to-reel tapes containing the hits including No Woman No Cry, Is This Love and Exodus, sat in a damp basement room for more than 40 years – Bob Marley and The Wailers stayed in that hotel in the mid-1970s.

The tapes were then rescued by Marley fan Joe Gatt, who told me more about how he came know about them on my programme on LBC London News.

“The hotel was being renovated or turned into flats. A friend of mine who works for a clearing company found them. He did say it said ‘Bob Marley’ on the boxes. And he did say they were damaged. He told the guy who ordered the clearing: ‘What shall we do with these?’ And he said: ‘They’re no good they can go in the skip.’ He called me because he knew I knew something about music and I was a fan and that I had seen Bob Marley before so, I said: ‘Yes, I’ll come and have a look’. I went and had a look and I could see they were really badly damaged.”

The condition of the tapes was of paramount importance, as Joe continues: “They were not in the original boxes, the boxes in the flood must have perished and somebody put them in the boxes. We then discovered they were 24-track which, in the recording business, is the main thing because they can do what they like with 24 track.” 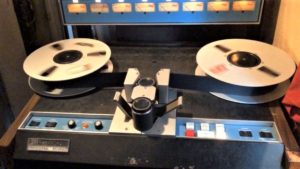 What happened next marked a turning point. Joe continues: “I brought them home and then I spoke with my friend Louie as I thought he’d know a bit more and have more contacts. We asked around and somebody told him of this guy called Martin Nichols who is very good and we took them to his studio, White House studios, in Weston-super-Mare (United Kingdom.) He looked at them and said: ‘Oh my God these are in a bad state.’ He said he would try to repair them because they are Bob Marley and you have to try.”

Was it successful? Joe beams: “Eventually he called us and said, ‘Well yes I think you should go and have a listen.’ And obviously we didn’t expect a lot because we knew the state of them.

We sat in his studios. He put the thing on and put the sound up and wow. The hairs on the back of our neck went up. Next came the goose bumps. It took me back to the Lyceum in 1975. To hear Bob Marley talking to the people and singing, it was amazing.”

I asked Joe more details about the reel-to-reel tapes and their contents: “We originally had 13 reels that were found and there are 40 tracks in total. And they are from three different venues. Lyceum 1975. Rainbow, also in London in 1977; and then in 1978 there are three concerts in Paris.” 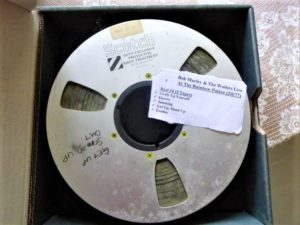 A recording of Bob Marley’s concert at the Rainbow Theatre, London, on 3rd June 1977.

A recording of Bob Marley’s concert at the Lyceum, London, on 17th July 1975.

What does this all mean to Joe, as a Bob Marley fan and recollecting his memories from the Lyceum; having seen Bob Marley and The Wailers there back in the 1970s and now listening to these live tapes again? Joe tells me: “This is the beauty of the story that I went to this concert in 1975 by accident really.

“A friend of mine bought two tickets for himself and his girlfriend but by the time the concert happened he called me because he knew I was a fan. I said, ‘Yes okay.’ So, we went and honestly I don’t believe my luck really it’s just a lovely story.”

For the fans, can they expect to hear these lost-now-recovered and restored tapes? I asked Joe: “Yes, the music is already saved on a hard drive and we expect them to be released at some point but obviously these things take time and the music belongs to the Martin family, so there’s a lot of things to sort out first.”

To put this into context, these recordings of Bob Marley are iconic and from a time when he was at his peak. With Marley continuing to have a huge worldwide fan base decades after his death, the interest to hear these once missing recordings is immense.

However, the tapes remain unsold. Dave Dormer at CTV News in Canada reports before they were due to go to auction lawyers representing the record company Island-UMG asked the tapes’ owners if they could be removed and if both sides could talk.