World Prematurity Day has been observed with Sir Chris Hoy MBE and his wife Lady Sarra helping raise awareness of preterm birth and the concerns of preterm babies and their families worldwide. 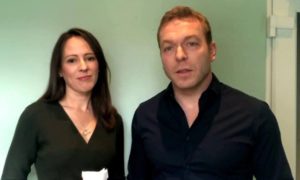 According to the World Health Organisation the number of babies born prematurely is around 15 million each year, accounting for about 10% of all babies born worldwide. The NHS says in the United Kingdom that number is 8%.

But with advances in medicine and the care and support of dedicated healthcare workers, survival rates are increasing.

Sir Chris is Great Britain’s joint-most successful Olympic athlete of all time, with six gold medals and one silver. Along with his wife Sarra, they spoke to me on LBC News about their experience.

Sarra began by telling me: “Our first child, Calum was born 11 weeks early back in 2014. We know what it’s like to be thrust into the medical world of neonatal care with a tiny baby. He weighed 2lb 2oz.

“There are lots of causes. For us it was a condition called Pre-eclampsia (PE), which occurs in pregnancy, and which then escalated into HELLP syndrome. That was a condition that affected me as the mother. The only way to solve that was to deliver the baby for the sake of his life and for my life.

“But there’s lots of other reasons why women can go into premature labour and there’s lots of research going into that to hopefully try to prevent that. Whilst that’s underway, there’s also research into trying to save the babies lives, who are being born.”

“Callum was 11 weeks early, but babies are born a lot earlier than that and survive and go on to lead very healthy and full lives.” 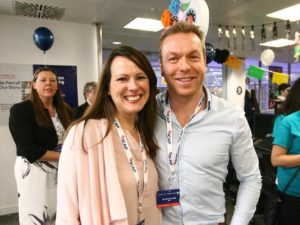 I asked Chris about the situation both he and Sarra found themselves in and the emotional support and care going forward. Chris told me: “It was a shock. It was a difficult journey, (Callum) was in for 8 weeks in the hospital and all you can do as a parent is sit and watch.

“You get two things to do each day. One is change the nappy and the (other the) baby sleeping proberbly 97% of the time, so you’re trying not to disrupt them. And we didn’t have these lovely wonderful nappies.

“Pampers have created these tiny nappy specially for premature babies. We had this irregular nappy which you had to fold over a couple of times. And there’s all the wires and the tubes and the cables and it’s quite a stressful thing to do because Calum was so small.”

“You’re just worried you’re going to hurt him. But you certainly watch, and you keep your fingers crossed.”

“But you look back now and he’s 5 years of age now. He’s the tallest in his class. He started school this year. It’s quite remarkable how well they can progress.”

Sarra adds: “When you’ve been through something like this it gives you a new perspective, and it makes you very passionate about it.

“We would like to be able to give other families hope. When something like this happens, there is support out there – and you need a lot of support. That’s one of the important things, to tell families that it’s okay to ask for support.

“Pampers (is) getting behind this and raising awareness of prematurity by creating a nappy that’s literally the size of the palm of my hand. 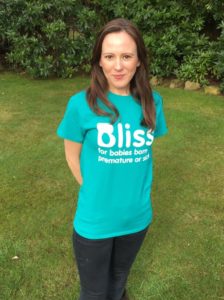 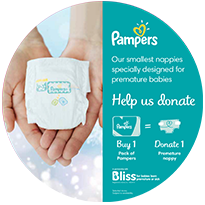 “It’s hard to look at our child now and imagine he was ever small enough to fit into this nappy and into our hands. “I think that’s a really important thing for families and the babies to be able to see there are companies and other charities supporting the babies and the families.”

Sarra has since become an ambassador for Bliss, UK’s largest neonatal charity. It provides support and research for families.

She says: “That’s where our passion lies having been through that with Callum.”